After many failed attempts at conceiving a second child, using many medical treatments, a doctor told Sharine and Brian Kretchmar to find a sperm donor. 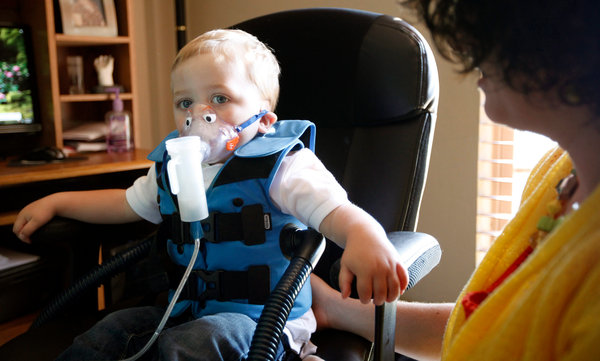 After many failed attempts at conceiving a second child, using many medical treatments, a doctor told Sharine and Brian Kretchmar to find a sperm donor. The Oklahoma couple combed through lists of sperm banks and donors, finally choosing a donor who, they were told, was a family man and a Christian with a clean bill of health. The sperm was stored at the New England Cryogenic Center in Boston, which checks donors for various genetic conditions.

After artificial insemination, Mrs Kretchmar fell pregnant and in April 2010 she gave birth to a boy named Jaxon. However, the baby failed to have a bowel movement in the first two days after his birth, a sign to doctors that something was awry. Jaxon was rushed to surgery and doctors told the Kretchmars he appeared to have cystic fibrosis.

“We were pretty much devastated,” said Mrs Kretchmar, 33, who works as a nurse. “At first, we weren’t convinced it was cystic fibrosis, because we knew the donor had been tested for the disease. We thought it had to be something different.” Genetic testing showed Jaxon carried cystic fibrosis genes – and Mrs Kretchmar was shocked to find out that she herself carried them. However, she was more shocked to find out that so, too, did the donor. They later discovered the donor’s sperm was decades old, originally donated at a laboratory halfway across the country and frozen since then. It is disputed whether it was actually tested.

Hundreds of such cases have been documented, but there are likely thousands more, according to Wendy Kramer, founder of the Donor Sibling Registry, a website she founded to help link families with children who are offspring of the same sperm donor. Donated eggs pose a risk, but sperm donation carries a far greater threat of genetic harm. Sperm donors are just as likely to carry genetic diseases than anyone else, but they can father far more children – 50, 100, or 150 – and each could potentially inherit flawed genes, making those genes more widespread in the general population. ~ New York Times, May 15