A gripping feature about the mysteries of the human brain and parental love appeared in the New York Times recently. 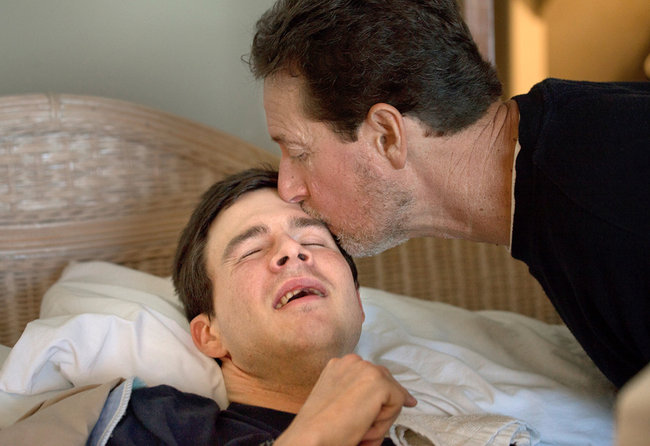 A gripping feature about the mysteries of the human brain and parental love appeared in the New York Times recently. One morning in October 2008, Judy Cox found her 26-year-old son lying on the ground, deathly pale and covered in purple blotches. He wasn’t breathing, and she and her husband couldn’t revive him. By the time paramedics arrived, Chris’s heart had been still for at least 15 minutes. It took another 15 for paramedics to revive him. Doctors doubted that he would survive. Five minutes after blood stops delivering oxygen, brain cells start to die. After 30 minutes, there is likely to be more dead tissue than living.

Chris had had debilitating back pain for a year, and had been prescribed Oxycontin. He had taken too much. The doctor told his parents that he was in a coma and had probably suffered serious, irreversible brain damage. Hospital staff urged his parents to pull the plug and sign a do-not-resuscitate order, so they wouldn’t be forced to revive him every time he started slipping away. They refused. He woke up 4 days later.

Three years later, Chris cannot speak. He breathes on his own, but his lungs face constant infections, he is sustained by a feeding tube, and his muscles are now short, twisted and knotted. Doctors say he has progressed from a vegetative state to a state of minimal consciousness. His parents say that his cognition is improving, and that he can respond to simple commands. Minimal consciousness remains something of a mystery.

The best hope for Chris and his family has, paradoxically, come from sleeping aids – Ambien and its generic counterpart zolpidem. In some cases they awaken people in a vegetative state. One notable example happened in South Africa in 1999. Louis Viljoen slipped into a vegetative state after he was hit by a truck. He had started scratching at his bed during the night, and his parents thought insomnia was to blame.

Their family doctor suggested zolpidem to help him sleep. However, 20 minutes after his mother ground the tablet into a pulp and administered it to him via straw, he became conscious and began to talk and move. He lost consciousness a few hours later. With time, he began to talk in complete sentences, recognised his mother, and began to remember things from before he would recede into a vegetative state. Eventually, he no longer needed zolpidem.

There are about 200,000 patients in the US stuck in the mysterious state in which Chris Cox found himself. The drugs do not work for everyone, but some people have shown profound recovery and there is room for hope. As Wesley Smith, of Secondhand Smoke, points out: “…doctors urged Chris’s parents to stop treating him, which probably meant to dehydrate him to death by taking him off tube sustenance. Had the parents done so, he wouldn’t have lived for this potential breakthrough.” ~ New York Times, Dec 1