The massacre of 20 6 and 7-year-olds along with 6 staff at an elementary school in Connecticut is a ghastly tragedy. But what is the real issue? 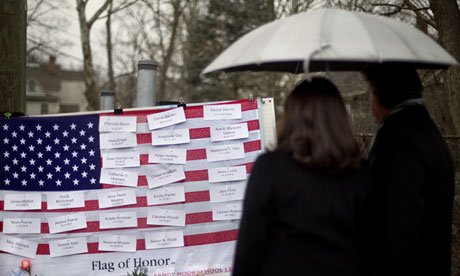 The massacre of 20 6 and 7-year-olds along with 6 staff at an elementary school in Connecticut is a ghastly tragedy. But what is the real issue? Lax regulation of gun ownership? Poor mental health care? The disintegrating nuclear family? An atomised society? There is room for endless discussion. Below are three points of view.

Medical historian Lindsey Fitzharris, of the University of London, writes in The Guardian, that we should not be quick to medicalize Adam Lanza and assert that he must have been “sick” if he did something unthinkably evil.

“As time progresses, we will learn more and more about the man who is responsible for the terrible slaying of so many innocent people. Undoubtedly, there will be further discussions about his alleged mental state. Was he a lonely individual? Did he show signs of depression? Was he autistic? What antisocial behaviours did he exhibit?

“An answer ‘yes’ to any one of those questions obviously does not make a person homicidal. While I do believe it is important to determine what factors may have led Lanza to open fire on Sandy Hook Elementary School – and whether this tragic event could have been prevented – I want to remind the US and the world of one thing: evil is about choice. Sickness is about the absence of choice.”

Bioethicist Arthur Caplan assumes that Lanza was deranged. He writes in NBCNews.com that the discussion of violence must become a public health priority in the US. The broken mental health system must be fixed. “The nation needs fewer dermatologists and allergists and a lot more psychiatrists and psychologists.” And children should be screened in schools for mental health problems.

“Given where we find ourselves, the fix means giving up a smidgeon of liberty to better protect safety. It means seeing violence as a public health problem that is just as real as swine flu or obesity. It means committing to a hard societal slog from a very bad place to something a bit better.”

Was Adam Lanza’s psychopathic violence genetically determined? No, say Sara Huston Katsanis,  of Duke University and David Kaufman, of the Berman Institute of Bioethics at Johns Hopkins, in the Huffington Post.

“Genetic markers have been associated with violence, such as the so-called “warrior gene” denoting the marker in the gene MAOA associated with a propensity to react aggressively to a stimulus. This marker also has been associated variably with individuals more likely to have high debt, low credit ratios or be high-functioning CEOs. But using MAOA or variations in any other gene to attempt to diagnose a person with a predisposition to violence or predicting a person’s likelihood to become violent is impossible and irresponsible at this time…

“Understanding “genetic clues” in the Lanza case, if any exist, would require considerable, careful research and analysis in context of the case and in comparison to other cases. But Lanza’s genetic markers will not explain why he did what he did nor prevent future occurrences.”