The year is barely a month old, but BioEdge is already sure who will win the annual “Foot in Mouth Award”: Japan’s finance minister Taro Aso. 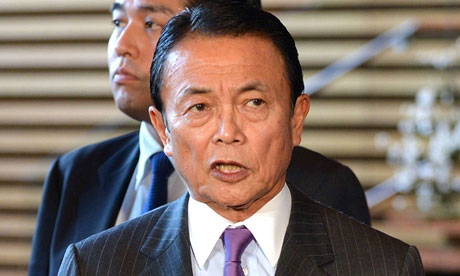 The year is barely a month old, but BioEdge is already sure who will win the annual “Foot in Mouth Award”: Japan’s finance minister Taro Aso.

The outspoken Mr Aso did not win many votes among Japan’s swelling elderly with his remarks at a meeting of the national council on social security reforms. They should “hurry up and die” to relieve pressure on the government to pay their medical bills, he said. “Heaven forbid if you are forced to live on when you want to die. I would wake up feeling increasingly bad knowing that [treatment] was all being paid for by the government.”

He also referred to elderly sick who cannot care for themselves as “tube people”.

This is not the first time that Mr Aso has questioned the state’s obligation to care for the infirm. In 2008, while serving as prime minister, he described “doddering” pensioners as tax burdens who should have looked after themselves better.

“I see people aged 67 or 68 at class reunions who dodder around and are constantly going to the doctor,” he told at a meeting of economists. “Why should I have to pay for people who just eat and drink and make no effort? I walk every day and do other things, but I’m paying more in taxes.”

To be fair to the 72-year-old Mr Aso, he is consistent. He has told his family not to use extraordinary means to keep him alive if he collapses.