A British sociologist thinks that state-run eugenics programs may be acceptable in the future. 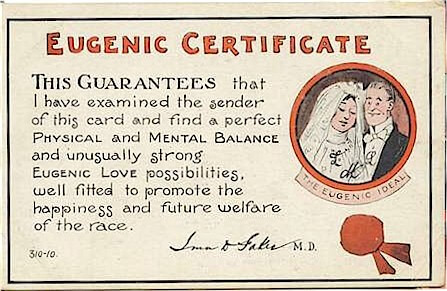 The notion of a state-organised eugenics programs is enough to unsettle the most indifferent in our society.

The idea, however, may be gaining traction in academic circles. In a recent article in the Journal of Applied Philosophy, sociologist Tim Fowler defends hypothetical state-run eugenics initiatives.

Fowler speculates about a world in which human enhancements are cheap and readily available.

The temptation in this situation is to put enhancement decisions in the hands of parents. Fowler, however, believes that entrusting parents with the ability to modify their kids as they wish could be ethically problematic. Such a move could allow “parents to reduce the real freedom of their children”, and “allow them to act in such a way that they directly contribute to the creation of social problems.”

Rather than repudiating the idea all together, Fowler considers a state-run alternative. He argues that the same justification given for state run education could be used for state-run eugenics initiatives.

“If one accepts the basic premise that enhancement and education are morally similar, then under certain circumstances the decision not to enhance looks precisely like the decision not to educate. Those same arguments which justify a state mandate to educate would apply in this case, and a state mandate goes beyond the requirements of the ‘Parental Choice’ view of enhancement control.”

Fowler rejects claims that his argument could be used to justify the infamous eugenics programs of WWII:

He goes as far as arguing that his eugenics program promotes the liberal ideal:

“Designing policies to promote tolerance, autonomy and opportunity above parental objections is not illiberal, but is in fact the outcome of a deep commitment to liberal values.”

A thought-provoking essay, perhaps. The twitterati were not particularly impressed. Author Matthew Anderson had this to say: “I’m adding this article to the “You can find an academic to defend just about anything” file.”