Orthodox Jews in Brooklyn are wrestling with the question of genetic testing — and what should and should not be revealed to people who use it. 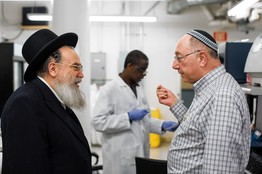 Orthodox Jews in Brooklyn are wrestling with the question of genetic testing — and what should and should not be revealed to people who use it. The community is using a screening program that targets genetic flaws common among Ashkenazi Jews originating in small, tightly bound communities in Central and Eastern Europe.

Many Jews now get tested to find out if they carry such mutations, but in many Orthodox communities, the kind of screening typically used is complicated by privacy, religious prohibitions, and conflicts with some of their communal values.

So community members came up with a new approach to identify people carrying genetic mutations for diseases who, if they were to marry one another, could result in children with lethal conditions. The program, called Dor Yeshorim (“upright generation” in Hebrew), tests young people for nine conditions common among Ashkenazi Jews and keeps the information in a database. Before a couple is betrothed — or sometimes even meet — their families call Dor Yeshorim with identification information and find out whether the couple is “compatible”. If they are not, the relationship is usually abandoned.

What is unusual about the program is not what it tells people, but what it doesn’t. Rabbi Josef Ekstein, founder of Dor Yeshorim, describes it as a “prevention program.” As the Wall Street Journal reports, the purpose of the program is to prevent births of children with a defective genetic condition by pointing out the risks to potential spouses.

The gene-testing field is rife with contention about how much information doctors should reveal to people. Some geneticists argue that scientists still do not grasp the relevance of most gene mutations, and that sharing information whose meaning is uncertain could be harmful. However others believe in a right to know everything, and that withholding information amounts to genomic paternalism. Ekstein argues that too often people don’t consider the “negative part of knowing” one is at risk. He argues that equal attention should be paid to “the right not to know”. ~ Wall Street Journal, Jul 9