A number of ethical questions have arisen surrounding the dramatic increase in US doctors requiring their patients to have urine tests. 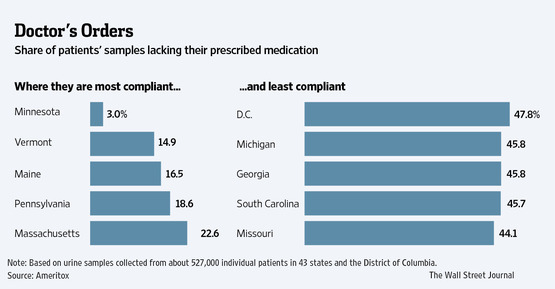 A number of ethical questions have arisen surrounding the dramatic increase in US doctors requiring patients who use pain-killers to have urine tests.

The number of tests increased by 21% between 2006 and 2011 (380 million to 486 million), according research by consulting company Venture Planning Group.

Doctors are turning to urine tests in the face of various patient issues. In addition to concerns that patients are selling prescription drug abudrugs or mixing them with illicit substances, there are added doubts about the inadequacy of other means of detection, such as questionnaires or contracts signed by patient and doctor.

Doctors favour the reliability of a urine test, but there is much concern about its overuse. Thousands of patients are complaining to medical regulatory bodies about the prohibitive cost of the tests – tests can cost up to $3000, and typically insurers won’t cover the full bill. Some poorer patients are choosing not to seek care.

The American Civil Liberties Union has claimed that the requirement of urine tests violates constitutional protections against reasonable search. They have challenged laws, passed in various US states, requiring that certain kinds of patients provide doctors with urine scans.

A number of the diagnostics companies have been accused of giving kickbacks to doctors who send samples to their laboratories. Millennium Diagnostics is currently under investigation for fraud and intimidation.

Xavier Symons
James Watson’s colleagues at Cold Spring Harbor Laboratory in New York have scuttled for cover after the Nobel Prize laureate was accused of making racist remarks. "Bewildered and saddened" by his remarks in the London Times, they have dismissed him as Chancellor, even though Watson had served as its director or president for 35 years. The 79-year-old Nobel laureate has cancelled a tour of the UK to promote his book Avoid Boring People and returned to the US.

Although Watson’s belief that Africans have lower IQs on average was inflammatory in itself, CSHL had another reason for distancing itself from Watson. The research institute was once the centre of the American eugenics movement. Its shameful association with scientific racism and compulsory sterilisation ended in 1940 and it has been trying to distance itself from its past ever since. In a press release, it stressed that it did not "engage in any research that could even form the basis of the statements attributed to Dr. Watson."

From 1910 to 1939 CSHL housed the Eugenics Record Office, which catalogued medical histories of families, carefully noting traits such as allergies, feeble-mindedness, civic leadership and immoral behaviour. At the time, the aim was to foster breeding of healthy citizens, as James Watson himself explains in short video clips on an educational website set up by CSHL.

The first CSHL director, Charles Davenport, was convinced that Mendel’s laws could be applied to humans. The managing director, Harry Laughlin, was responsible for drafting a "model law" for compulsory sterilisation for the insane, criminals, epileptics, alcoholics, blind persons, deaf persons, deformed persons, and indigent persons. This was taken up by a number of American states and even used as a model for eugenics legislation in Nazi Germany.

Although Watson is notorious for promoting eugenics — rebadged as genetic engineering — the American scientific community has only reacted to his negative comments on blacks. "He has failed us in the worst possible way. It is a sad and revolting way to end a remarkable career," said Henry Kelly, president of the Federation of American Scientists.

In the UK, however, many scientists are reported to be incensed by the censorship of Watson’s views. The former head of the Medical Research Council, Colin Blakemore, commented that "Jim Watson is well known for being provocative and politically incorrect. But it would be a sad world if such a distinguished scientist was silenced because of his more unpalatable views."