Legal, safe and rare abortion is often seen as a necessary component of women’s health. However, a study of abortion in Chile published this week in PLoS One suggests that “the legal status of abortion does not appear to be related to overall rates of maternal mortality”. 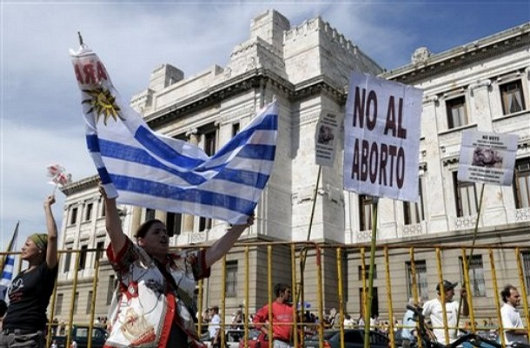 (This article has been substantially revised.) Abortion is often described as a necessary component of women’s health. Abortion rights groups contend that unless it is legal and freely available, backyard abortionists will fill the gap in demand and maternal mortality rates will rise. Remarkably, though, for such a contentious issue, there is little data to back up this claim.

Chile is an important “natural experiment” for abortion policy. In 1989 abortion was made illegal with one of the more restrictive abortions laws in the world. Good statistics from the past 50 years make it possible to compare MMRs before the ban and after.

According to Elard Koch, of the University of Chile, and colleagues,  the study “provides counterintuitive evidence showing that making abortion illegal is not necessarily equivalent to promoting unsafe abortion, especially in terms of maternal morbidity and mortality. Chile’s abortion prohibition in 1989 did not cause an increase in the [maternal mortality rate] in this country. On the contrary, after abortion prohibition, the MMR decreased from 41.3 to 12.7 per 100,000 live births –a decrease of 69.2% in fourteen years.” The highest mortality rate was in 1961 (47.9 per 100,000 women of reproductive age), and the lowest in 2003 (0.72 per 100,000).

The article is sure to prove controversial in the never-ending abortion wars in developed countries. Support for “safe, legal and rare” abortion, in US President Bill Clinton’s famous phrase, is based on two assumptions: first, that it is a fundamental right for women and, second, that it is absolutely necessary for women’s reproductive health. Koch’s analysis, the first evidence-based publication to analyse women’s health after elective abortion became illegal in a country, suggests that the second assumption may be wrong.

The most important factor in reducing the MMR, Koch says, is more education for women. “Educating women enhances a woman’s ability to access existing health care resources and directly leads to a reduction in her risk of dying during pregnancy and childbirth.” Other factors include: nutrition for pregnant women and their children in the primary care network and schools; universal access to improved maternal health facilities; changes in women’s reproductive behavior enabling them to control their own fertility; and clean water and good sanitation.

Another stunning finding from the study is that education is also associated with higher mortality rates. In his executive summary Koch calls this the “fertility paradox”: “when the total fertility decreases and produces a delayed motherhood it can also provoke a deleterious effect on maternal health via an increase of the obstetric risk associated with childbearing at advanced ages.”

“This is certainly a paradox: education is the major modulator that has helped Chile to reach one of the safest motherhood [statistics] in the world, but [it] also contributes to decrease fertility, delaying motherhood and puts mothers on risk because of their older age.”

The implications of the “fertility paradox” could be even more controversial than Koch’s findings about abortion. The World Bank, for instance, says “there is no investment more effective for achieving development goals than educating girls”. The UN’s Millennium Goals use more education for women as an index of economic and social progress. But this may come with a high price tag.