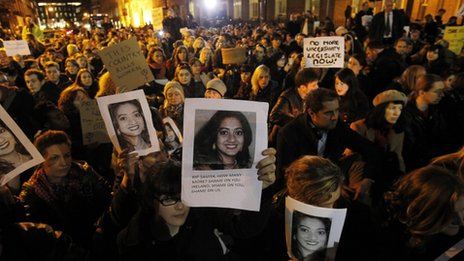 Ireland’s restrictive abortion laws are under attack after a 31-year-old pregnant woman died of septicaemia after pleading vainly with doctors to abort the child. Savita Halappanavar, an Indian dentist working in Galway, has become a martyr for abortion reform.

An independent expert has been appointed to investigate the incident. But the woman’s husband, Praveen, an engineer, claims that she asked several times over a three-day period for the pregnancy to be terminated, because she was “in agony” and was miscarrying. However staff at Galway University Hospital refused because there was still a foetal heartbeat. They were told that this was the law and that “this is a Catholic country”.

Ms Halappanavar allegedly responded that she was neither Catholic nor Irish.

When the foetal heartbeat stopped, the dead foetus was removed, but Ms Halappanavar became septicaemic and died on October 28.

The death came at a moment when abortion was already front and centre in Irish politics. Despite — or perhaps because of– Ireland’s ban, its maternal death rate is one of the lowest in the world, lower, in fact, than England’s, where it is freely available. Abortion’s legal status is ambiguous. The Irish Constitution recognises a right to life in the unborn, “with due regard to the equal right to life of the mother.” But in 1992 the Supreme Court ruled that it would be legal if there was “a real and substantial risk” to the life of the mother. Successive governments have avoided drafting a law to incorporate this into Irish legislation. Then in 2010 the European Court of Human Rights found that Ireland had failed to implement properly a constitutional right to an abortion where a woman’s life was deemed to be at significant risk.

In January the government commissioned an expert panel to propose ways of implementing the ECHR decision. And it arrived this week, just when news of Ms Halappanavar’s death broke in the media. Adding fuel to the fire, only a few weeks before, on October 18, the first abortion clinic in Ireland opened in Belfast. It was bitterly opposed by pro-life demonstrators.

A leading obstetrician and gynaecologist, Dr Sam Coulter-Smith, told the Belfast Telegraph that he suspected that the husband’s version of the story was not accurate. “I think most of us who work in obstetrics and gynaecology, there may be individual differences, but the majority would be of the view that if the health is such a risk that there is a risk of death and we are dealing with a foetus that is not viable, there is only one answer to that question, we bring the pregnancy to an end.”

“This case probably does not have a lot to do with abortion laws,” he said.

Minister for Health Dr James Reilly said it would be an extremely serious matter if there had been any hesitation in relation to Ms Halappanavar because of moral or religious beliefs. However, he said he had no evidence of the application of a Catholic bias in relation to treatment and he warned against prejudging the circumstances surrounding the death.

Warnings from doctors and ministers not to pre-judge the case have fallen on deaf ears in the media. “Ireland’s law and Catholic culture allowed Savita Halappanavar to die” was the headline in the normally sober UK magazine, New Statesman.