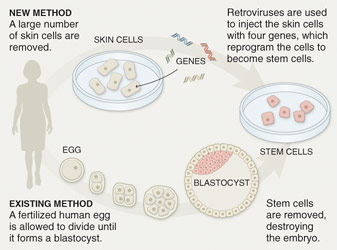 Two separate teams in Japan and the US have simultaneously published papers showing that ordinary human skin cells can be reprogrammed to behave like embryonic stem cells. The possibility of achieving all the potential benefits of stem cells without major ethical or political obstacles has become a reality.

Leading stem cell scientists were agog. "This is a tremendous scientific milestone, the biological equivalent to the Wright brothers’ first airplane," said Robert Lanza, of Advanced Cell Technologies. The ultimate goal of stem cell research has always been to produce cells which are tailor-made for each patient. Until now scientists have been speaking as if cloning embryos were the only way to achieve the near-miraculous gains they forecast. But now it appears that reprogrammed cells can do everything that embryonic stem cells can do. Overnight, therapeutic cloning has become an also-ran in the quest for patient-specific cells.

The cells, called induced pluripotent stem cells (iPSCs), are created by using a retrovirus to introduce 4 genes into ordinary skin cells. After a while, the skin cells revert to a pluripotent state, meaning that they can change into nearly any type of cell in the body. At the moment there are some drawbacks, as the cells can turn cancerous, but scientists are quite confident that this will quickly be overcome. Dozens of research teams around the world are already beavering away.

The articles were published in two journals. A team led by Dr Shinya Yamanaka of Kyoto University published in Cell, following up work on mice which they had reported last year. A paper in Science is from a team led by Junying Yu, who works in the laboratory of stem-cell pioneer James Thomson of the University of Wisconsin-Madison.

The two major ethical objections to cloned human embryos have been the destruction of human life and the exploitation of women for their eggs. But neither is an issue with this new technique. "Everyone was waiting for this day to come," said Fr Tadeusz Pacholczyk, of the National Catholic Bioethics Center in the US. "You should have a solution here that will address the moral objections that have been percolating for years." It also takes the heat out of the US debate over government funding for embryo research. President Bush said that the new research was consistent with his policy of "encouraging scientific advancement within ethical boundaries". And a spokesman for the Institutes of Health’s stem cell task force said that iPSCs would almost certainly be eligible for Federal funding.

Furthermore, the new technique appears to be simpler, more efficient and cheaper. “People didn’t know it would be this easy,” Dr Thomson says. “Thousands of labs in the United States can do this, basically tomorrow.”

Nonetheless, researchers are not budging from their insistence that research on embryos and cloning is still absolutely necessary. The use of embryos is the "gold standard" for the production of stem cells, commented Shoukhrat Mitalapov, the researcher who became the first to clone a primate successfully last week.

The development will transform the controversial stem cell scene, as scientists quickly shift their attention from ethically fraught cloning to unobjectionable reprogramming. One of the world’s leading experts in cloning, Professor Ian Wilmut, the creator of Dolly the cloned sheep, jumped ship early. Last week he announced that he was giving up his work on therapeutic cloning to work on reprogramming. California is sure to benefit, as its stem cell institute has US$3 billion to disburse to research groups in the state. Significantly, Dr Yamanaka has already announced his affiliation with a San Francisco research effort and may well be seeking some funding. David Jensen, of the California Stem Cell Report, says that the institute has already moved to capitalise on reprogramming opportunities, modifying its research standards on grants to take in such efforts. ~ Reuters; Washington Post; New York Times; San Francisco Chronicle; Globe and Mail, Nov 20