In the latest issue of the American Journal of Bioethics, Paul E. Morrissey, of Brown University, in Rhode Island, suggests that both kidneys could be removed from brain trauma patients on life-support. 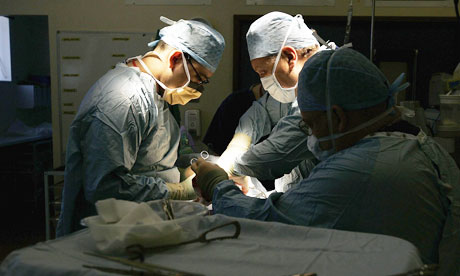 There may be an international shortage of kidney donors, but there is no shortage of creative solutions. In the latest issue of the American Journal of Bioethics, Paul E. Morrissey, of Brown University, in Rhode Island, suggests that both kidneys could be removed from brain trauma patients on life-support. Afterwards, the patients would be removed from life support and would die. Two fresh and viable kidneys become available for rapid transfer to waiting recipients.

Life without kidneys is normally short, but Morrissey argues that the patient is so close to death that it is reasonable to assume that removal of the kidneys cannot be described as the cause of death. Hence, the fundamental principle of transplant surgery is observed, the Dead Donor Rule: that organ retrieval itself must not be the cause of death. He calls the procedure premortem donation.

The argument could probably be extended to other organs, one of the accompanying commentaries notes, although Morrissey is tactful enough not to note this, say, the heart or the liver.

The tricky question is whether the operation causes death. Morrissey says No:

“Medically and legally the donor would be alive at the time of surgery and would die secondary to irreversible head injury as some interval after the surgical procedure. This proposal is therefore unlike proposals for euthanasia by organ donation or criminal execution by organ donation. For the donor or donor surrogate facing imminent death, premortem donation balances the promise of a final altruism against the exploitation of a vulnerable population.”

There are many other benefits: the hospital staff can work in an orderly fashion; the family has time to grieve; the public maintains its faith in the Dead Donor Rule; and live-saving kidneys enter the transplant system.

This target article in AJOB was praised for its creativity by some specialist and criticised by others. The authors of one commentary were scathing: “Bilateral donor nephrectomy will have catastrophic consequences on survivors of erroneous prediction of poor neurologic outcome or survival after [withdrawal of life support]. Morrissey’s proposal violates the Hippocratic Oath of do-no-harm and the public trust in professional obligations to serve patients’ best interests.”

However, Franklin G. Miller and Robert D. Truog, two well-known American bioethicists, believe that the argument is quite sound. They contend that: “Probably some will oppose the proposal on slippery slope grounds: Procuring both kidneys premortem is the entering wedge for abandoning the dead donor rule. Facing the reality of our current practices, however, makes it clear that the dead donor rule is preserved only as a fiction.” ~ AJOB, May 31