Two doctors and a midwife are on trial for their role for adopting out babies and “disappearing” their mothers. 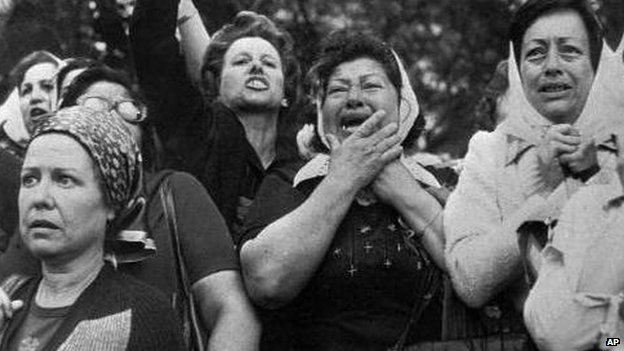 Mothers of “los desaparecidos” protesting in 1977

Separating mothers from their babies has usually been regarded as a crime, but there are few instances more egregious than baby theft by the Argentine 1976-1983 military junta. Now in their 80s and in failing health, two doctors and a midwife have been put on trial for their role in this dark chapter.

They are accused of participating in a policy of ending the bloodlines of leftists in order to reorganise society. About 500 pregnant women were imprisoned by the junta. When they gave birth, their babies were taken and adopted by military families. The women were killed or were “disappeared”. About 115 of these children, now in their 30s, have been reunited with relatives. The rest have not been located.

The two doctors, Norberto Bianco and Raul Martin, and the midwife, Yolanda Arroche, have been accused of participating in the systematic theft of nine infants. Bianco has already been found guilty of taking one of the babies.

“It’s a very important trial because it will judge the complicity of doctors and midwives who were directly responsible for these crimes against humanity,” said 36-year-old Francisco Madariaga, one of the children. Arroche helped to organise his kidnapping and to falsify his birth certificate.

“With this trial we’ll be able to learn what they did with our mothers the day after we were born, know that there will be a punishment and justice will triumph because we are the living proof of the crime,” said Madariaga. He discovered his  true identity in 2010 and was able to find his biological father. His mother was 24 and seven months pregnant when she was arrested. Her body has never been found.