Swiss scientists believe that a combination of electrical impulses and drugs could help some spinal trauma victims walk again. 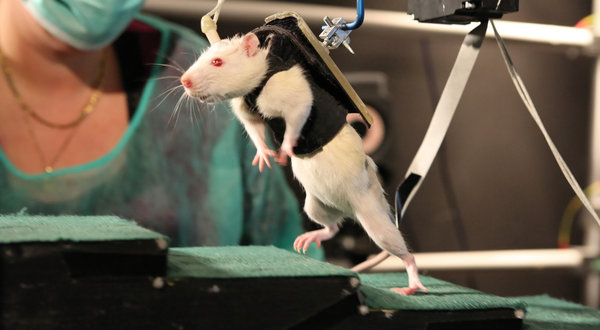 Crippling spinal cord injury has been one of the most powerful arguments for the pursuit of human embryo research. The late quadriplegic Christopher Reeve argued passionately that it would eventually lead to spectacular cures. That hope has faded. Geron, a biotech specialising in human embryonic stem cells, dropped its research into a spinal cure recently.

Now Swiss scientists believe that a combination of electrical impulses and drugs could help some spinal trauma victims walk again. In a study published this week in Science, a research team led by Grégoire Courtine of the Federal Institute of Technology in Lausanne cut all direct nerve connections to the hind legs of ten rats without completely severing the spinal cord. After a combination of vigorous exercise, electrical stimulation in the motor area of the brain and in the spinal cord below the injury, and growth-inducing drugs, the rats recovered much of their ability to walk.

“The way I think about it is that there is this little island of spare tissue in the injured area, and the neurons in that island begin to act as a relay center, bypassing the injury,” Dr. Courtine told the New York Times. He is looking forward to conducting human trials.

The therapy will not help all victims of spinal cord injury. The rates had sustained a disabling injury, but their spinal cords were not completely severed. But this is the case for up to a third of all people with spinal cord trauma. ~ New York Times, May 31