An interview with the author of The Professional Guinea Pig 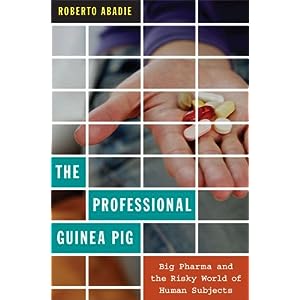 Roberto Abadie has just published The Professional Guinea Pig: Big Pharma and the Risky World of Human Subjects. It is a startling look into a dark American underworld where people risk their health and their lives by participating in clinical drug trials for easy cash. We interviewed him about his findings.

BioEdge: Not long ago I was in Boston and I noticed gigantic advertisements in the subway stations for human guinea pigs. How many are there in the US? Can you actually support yourself by enrolling in clinical trials?

We don’t know exactly how many professional healthy paid subjects there are in the US because there is no centralized registry. But every year hundreds of new investigational drugs are tested involving thousands of paid subjects.

There are basically two groups of subjects. One is the group I focused on my study — healthy research subjects who make a living by testing drug safety in Phase I trials. Phases II and III test both drug safety and efficacy. They usually involve patients who have the condition the drug is supposed to address. If it’s a cancer drug, it would be cancer patients, for HIV, HIV positive patients and so on.

For comparative purposes, I also studied a group of HIV patients testing different drugs or drug regimes in Philadelphia. While money was important for them, they volunteered to gain knowledge about disease, track the virus load and take and active participation in their treatment. These trials can last for years and they involve visits every month or so. For every visit patients would receive a bus token or two and around $30. I recently learned that at other research sites poor patients seem to do more than one at a time or one after the other to maximize financial gain.

This is a disturbing fact because these patients are very sick and vulnerable and serial participation in trials might expose them to serious, life-threatening risk.

How much can professional guinea pigs make in a year? Usually they volunteer for 8 to 10 trials a year (assuming they follow guidelines that prevent them from participating in more than one trial at a time and that they wait 30 days after the trial is over to enrol in another one). They can make then, up to about $20,000. If they do more than one trial simultaneously or don’t wait in between trials they can make even more. They are supposed to pay taxes but most of them don’t. Their income is comparable to what a McDonald’s worker or a retail employee would make.

BioEdge: You call it a “mild torture economy”. Is the work dangerous?

I wish I had come with that idea. Actually, it’s from Spam, a veteran guinea pig and currently a janitor’s organizer. He refers to guinea-pigging as a mild torture economy because it’s a trade, a particular job or economic exchange where subjects are paid not to produce or do anything but to “endure” the pain, discomfort and extreme boredom involved in being a professional research subject.

In general, serious adverse drug reactions (ADRs) are rare because the drug either has already been in the market and tested on millions of consumers/patients or, if it’s a “first in man” experiment, it has been already tested in animals.

Most subjects I interviewed report fainting or rashes or other mild effects. Still, serious ADRs occur from time to time. Just a few years ago a Parexel trial in England went very wrong and all the subjects that took the drug (instead of the placebo) ended up suffering life threatening conditions that left some with missing limbs, paralysis and permanent scars.

What I worry about is not the ADRs which subjects might face in a particular trial (although psychotropic drug trials are indeed riskier and pay much more in an attempt to recruit volunteers) but the long-term risks for volunteers who have done 80, 100 or even more trials over many years.

We don’t know which drugs they have tested, how they might interact with each other and with other medication they might take or with other chemical pollutants in the environment. We need to do research on this topic to better protect them.

BioEdge: Until the 1970s, most clinical trials were conducted on prisoners. What sort of people volunteer nowadays?

Rich or even middle class folks (unless they are students, particularly medical students) don’t do trials for money.

What you find is a lot of struggling poor guys: students in search of tuition money, struggling artists, independent workers such as painters, construction workers, bike messengers, and so on. But you will also find unemployed in search of “quick easy money”. Some are unemployable – the disabled and the homeless, and other very vulnerable groups. There have been recent reports that poor, mostly African-American homeless, some with alcohol or drug related issues, had been hired as trial subjects at a site in the Midwest and that undocumented Latinos were hired in Miami.

BioEdge: Do you regard recruiting professional guinea pigs as ethical? After all, drugs have to be tested on someone.

Of course drugs have to be tested in human beings after being tested first in animals. There is no way around it. If you ban Phase I trials and go from animal tests to drug-efficacy trials you only transfer the risks of testing drug safety to a population of sick patients that might enter the trial out of desperation hoping for a medical miracle and taking big and unnecessary risks in the process. It would be unethical for example to test an experimental cancer drug in mice and rats and then in cancer patients without testing it first in healthy volunteers.

So is there something wrong with paying healthy subjects to test drug-safety? Maybe not in theory but in practice, yes. Money is deliberately used to recruit and retain volunteers. Although subjects can formally decide to leave a trial at any time, they lose a lot of money if they do. And this situation is clearly coercive. The fact that most professional guinea pigs are poor places them in a very vulnerable position.

This is serious because most don’t have paid health insurance. And if something really bad happens during the trial they — or their relatives if they die — can and have sued. But most subjects do not have ready access to a lawyer and won’t consult unless it’s a very serious case.

BioEdge: The pharmaceutical industry uses the vaguely Orwellian term “paid volunteers”. Do you see this work as dehumanising?

Calling a paid subject a “volunteer” is a cynical oxymoron. How can somebody be paid to volunteer? The pharmaceutical industry just doesn’t want to face the fact that their volunteers are indeed workers. They think that guinea-pigging is dehumanizing and alienating.

Spam told me that the industry recruited professional subjects because they wanted dependable bodies, subjects who would comply with the trial demands, who would pee and give blood on demand day in and day out. Some guinea pigs compare their experiences with sex workers, who are wanted and rewarded because they have compliant bodies.

BioEdge: You yourself were a participant in a clinical trial. Did that inspire you to do further research?

Yes, of course. I participated in just a few trials. I did it for the money when I was a graduate student in Canada and I didn’t think it would become a research subject at that time. But when Ellen Roche, a 24-year-old subject at an asthma study died at Johns Hopkins a few years later, I realized that nobody knew who the healthy paid subjects were, what motivated them or how they decided to join trials or the effects money had in the way they perceived and dealt with risk.

That’s why I decided to do an ethnographic study of professional guinea pigs in Philadelphia, a hotbed of clinical trials activity. My study is the first empirical exploration of this group not only in the US but to my knowledge, anywhere.

BioEdge: If the current recession deepens, do you think that more people will become professional guinea pigs?

Absolutely. There are many more people trying to get into drug safety trials nowadays but the trial opportunities have not keep up with the demand. Most trial sites will stick with the old, dependable professional guinea pigs. But since trial sites are always under enormous pressure to recruit fast, a growing population will make things easier for them.

BioEdge: What public policy measures are needed to protect people who agree to be professional guinea pigs?

I discuss a number of policy recommendations in my book but I think the most important one would be the creation of a centralized registry to record trial participation. It does not involve access to private medical records.

But we need to know who participated in which trials, how often, and if any ADRs occurred. A centralized registry would also protect subjects by preventing them from enrolling in two trials at once or in one after another without waiting the 30-day wash-out period. A similar proposal has already been discussed in Europe.

Also, we need to do a long-term epidemiological study to assess long-term toxicological effects derived from years of continuous trial participation. This is the only way to definitively answer the question about long-term risks  professional guinea pigs.