A court has declared a sacred practice unconstitutional. 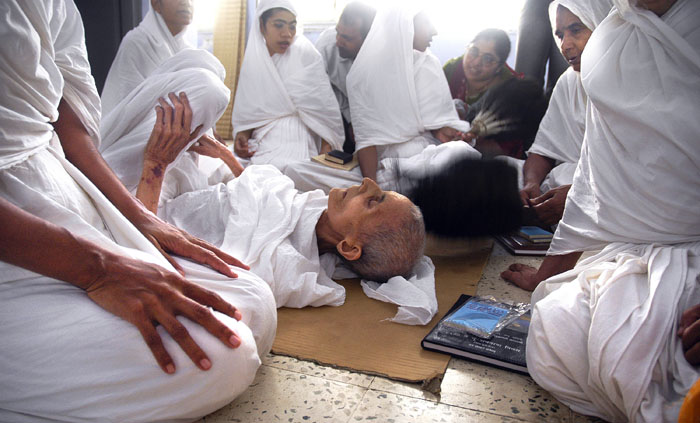 While Western countries wrangle about rational suicide, India is debating spiritual suicide. The High Court of the state of Rajasthan has ruled that the Jain practice of Santhara (or Sallekhana) is illegal and not an authentic element of their religion.

The Jains, one of India’s ancient religions, believe in the sanctity of all life – so much so that they often wear face masks lest they kill gnats. But one of their practices is to fast unto death as a way of liberating the soul from the cycle of birth, death and rebirth. There are about 5 million Jains in India, and each year some 300 die by santhara. Most of these are elderly or suffering from illnesses.

After a critic of this practice lodged a public interest complaint, the court ruled that santhara violated India’s ban on suicide and assisting a suicide. The court asked the state to “stop and abolish” the practice. “Any complaint made in this regard shall be registered as a criminal case and investigated by the police,” the judges said.

The Jain community, numbering about 4 million, is outraged at the ban on a custom which they consider sacred and deny is suicide. They believe that it is an infringement of their constitutional right to religious freedom. “Suicide is a great sin, the result of despair. But sallekhana is a triumph over death, an expression of hope… With suicide, death is full of pain and suffering. But sallekhana is a beautiful thing. There is no distress or cruelty,” a Jain nun told William Dalrymple in his book Nine Lives.

Poonam Chand Bhandari, a Jain lawyer has filed a petition against the ruling, arguing that santhara’s purpose is “self-purification; purity of soul; it is for penance. Its purpose is purely spiritual, which does not come under the domain of the law.”

However, Nikhil Soni, the lawyer who sued to have santhara declared illegal, says that it can be a form of elder abuse by greedy relatives. He also describes death from thirst and starvation as inhuman.

On Monday the Jain community will march in protest against the court’s decision.