Since legalisation 991 people have died. 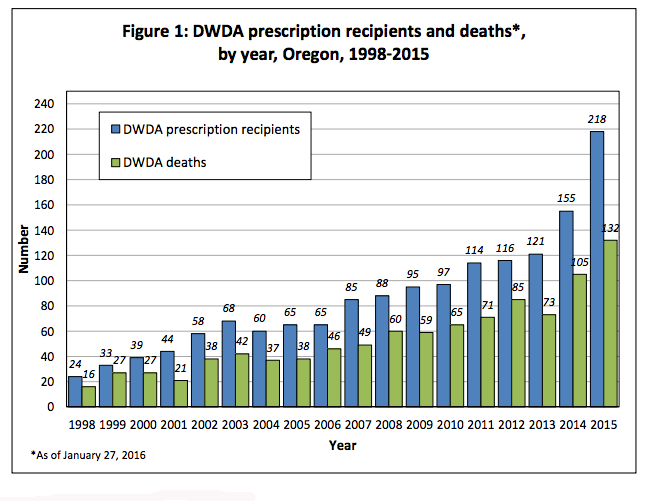 Oregon is the model for assisted suicide legislation throughout the United States, so its annual “Death with Dignity” report for 2015 deserves close scrutiny.

Since the law was passed in 1997, a total of 1,545 people have had prescriptions written under the DWDA, and 991 patients have died from ingesting the medications.

The figures are not as straightforward as they might seem. During 2015, 218 people received prescriptions for lethal medications, but only 132 people died. Why the difference? Many people keep the medication on hand and wait until they are ready to use it – which could be in the next calendar year. Some die before using it; some disappear from the official statistics. So, of the 218, 125 used the medication and died; 50 died before they used it; 5 died and Oregon does not know whether or not they used it; and for 38 people (17%), there is no information about whether they used it or whether they are alive or dead.

Oregon is not far off the mean, but its population is older, whiter, more likely to live alone, and better educated than the US average. Those who died were even whiter and even better-educated than the Oregon average.

Although uncontrolled pain is often seen as sufficient justification for legalised assisted suicide, relatively few people even mentioned it. The three main reasons were “less able to engage in activities making life enjoyable” (96%); “losing autonomy” (92%); and “loss of dignity” (75%).

“Inadequate pain control or concern about it” was mentioned by 28.7% but the statistics do not indicate how many actually had actually experienced unrelieved pain.

Statistics about the dying process are very skimpy. Brittany Maynard, who must be among the 132 people in Oregon’s figures, died quickly and peacefully, surrounded by her family and friends. But it is not at all clear whether or not this is typical. For about 80% of the 132 deaths there is no information on how long it took or whether there were difficulties. In 2015, there is information on only 27 deaths; in 4 of these there were complications such as regurgitation or seizures.

One curious detail from the statistics: since 1997, 6 patients have regained consciousness after taking a lethal dose of medication. They have not been recorded in the statistics as assisted suicides. They probably died of their underlying complications – but this cannot be verified. Perhaps they are alive today.