Princeton bioethicist Peter Singer and a research assistant, Agata Sagan, proposed a “morality pill” in a column in the New York Times this week. They speculate that moral behaviour is at least in part biochemically determined. Hence, it should be possible to engineer moral behaviour with drugs. Here is the scenario that they paint: 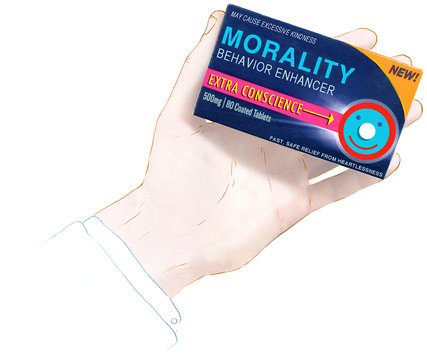 Princeton bioethicist Peter Singer and a research assistant, Agata Sagan, proposed a “morality pill” in a column in the New York Times this week. They speculate that moral behaviour is at least in part biochemically determined. Hence, it should be possible to engineer moral behaviour with drugs. Here is the scenario that they paint:

“If continuing brain research does in fact show biochemical differences between the brains of those who help others and the brains of those who do not, could this lead to a “morality pill” — a drug that makes us more likely to help? Given the many other studies linking biochemical conditions to mood and behavior, and the proliferation of drugs to modify them that have followed, the idea is not far-fetched. If so, would people choose to take it?

“Could criminals be given the option, as an alternative to prison, of a drug-releasing implant that would make them less likely to harm others? Might governments begin screening people to discover those most likely to commit crimes? Those who are at much greater risk of committing a crime might be offered the morality pill; if they refused, they might be required to wear a tracking device that would show where they had been at any given time, so that they would know that if they did commit a crime, they would be detected.”

They foresee some objections to their idea. Some people will argue that depriving someone of free will can never be justified. But Singer and Sagan are sceptical of the existence of free will, so they suspect that this is not a sound objection.

Morality pills are not a novel idea. Another Australian utilitarian, Oxford bioethicist Julian Savulescu, believes that it would be a crime not to “enhance” people to act more morally. A couple of years ago he and Ingmar Persson contended that:

“If safe moral enhancements are ever developed, there are strong reasons to believe that their use should be obligatory, like education or fluoride in the water, since those who should take them are least likely to be inclined to use them. That is, safe, effective moral enhancement would be compulsory.”

A very specialised morality pill is already being used in some jurisdictions: chemical castration. This is meant to turn repeat sex offenders into harmless eunuchs. Dmitri Medvedev, the president of Russia, has backed the idea. And an editorial in the BMJ in 2010 gave it cautious approval:

“Given the transparency of benefits and risks, there is no obvious reason why an offender should not be able to make an informed choice about drugs… Physical castration as part of a rehabilitative strategy may even have a place.”