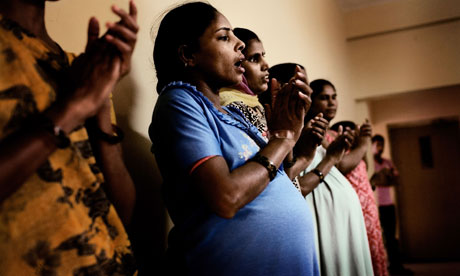 The Confederation of Indian Industry
has
predicted that surrogacy will be a gigantic US$2.3 billion industry by
2012. This is becoming an increasingly familiar statistic. But what is life
like for a surrogate mother? An article in the
University of Chicago feminist journal Signs is an in-depth investigation
of the recruitment and life of surrogates. Author Amrita Pande did fieldwork in the town of Anand, in
Gujarat, between 2006 and 2008. She interviewed 42 surrogates, their husbands
and in-laws, 8 intending parents, 2 doctors, and 2 surrogacy brokers.

One
quote from a broker named Nirmala sticks with you:

“To convince the
women I often explain to them that it’s like renting a house for a year. We
want to rent your womb for a year, and Doctor Madam will get you money in
return. I tell them surrogacy is not immoral. It is much better than a woman
going from one man’s bed to the next to make money. Prostitution will not pay
her much and can also lead to diseases.”