Most news about military medical ethics involves doctors who harm patients. But in Bahrain 20 Shi’ite doctors and nurses have been jailed for up to 15 years for helping patients. 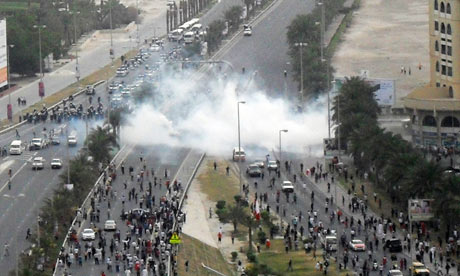 Most news about military medical ethics involves doctors who harm patients. But in Bahrain 20 Shi’ite doctors and nurses have been jailed for up to 15 years for helping patients. In a case which has heaped international condemnation upon the ruling Sunni monarchy, a military court found them guilty of charges ranging from occupying a hospital, to stockpiling weapons, spreading lies, sedition, and withholding treatment from Sunni patients.

The charges arose from riots in March and April over alleged oppression by the Shi’ite majority. After being forced from a large square in the city, protesters regrouped at the Salmaniya medical centre, where doctors and nurses treated them in makeshift clinics. “We were as far away from politics as you could be but we found ourselves in the centre of it because were treating the victims,” Dr Ali al-Akri told The Guardian.

The claims of the government and the protesters are inextricably linked to the bitter politics of the Arab Spring, but the Thai president of the World Medical Association, Wonchat Subhachaturas, said that these sentences were “totally unacceptable”. He continued: “It is a sad day for medicine when physicians are incarcerated for treating patients. Physicians have an ethical duty to care for all patients in situations of conflict irrespective of the political circumstances. The disproportionate nature of the sentences handed down in this case after the court’s seven minute hearing is a disgrace and must be overturned. Physicians and health workers must be protected in these circumstances and not condemned.”