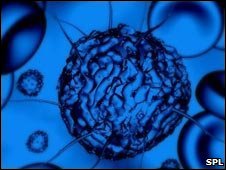 A complication from stem cell therapy
has led to the death of a patient with kidney disease. The patient suffered
tissue damage and died from an infection after stem cells were injected into
the kidney, according to a report by Canadian and Thai researchers in the
Journal of the American Society of Nephrology.

The incident highlights the gap between
stem cell research and treatment. Animal studies appeared to show that injecting
stem cells directly into the kidney would be safe. Instead, it caused tissue
damage — called angiomyeloproliferative lesions — at the injection sites.

Dr Duangpen Thirabanjasak, from
Chulalongkorn University, who led the research, said: “This type of lesion
has never been described before in patients, and we believe that this is either
formed directly by the stem cells that were injected or that the stem cells
caused these masses to form.”

Andras Nagy, of Toronto’s Mount Sinai
Hospital, and Susan Quaggin, of the University of Toronto wrote in the journal
that caution was needed with stem cell therapies – particularly if unregulated
private clinics are offering them.

They wrote: “Premature enthusiasm and
protocols that are not fully vetted are dangerous and result in negative
publicity for the field of stem cell research, and more importantly, may result
in disastrous outcomes with no benefit to the patient. Although there is
promise, a large gap still exists between scientific knowledge and clinical translation
for safe and effective stem cell-based therapies.” ~BBC News, June 17