Today, March 21, is World Down Syndrome Day. Down Syndrome, also called Trisomy-21, occurs when people have a third copy of their 21st chromosome – hence the choice of March 21. In 2011 the United Nations passed a resolution supporting the celebration and declaring grandiloquently that:

People with Down syndrome, on an equal basis with other people, must be able to enjoy full and equal rights, both as children and adults with ‘opportunities’ and ‘choices’.

This is the theme of a series of very touching and entertaining YouTube interviews with Down Syndrome people around the world which were released this week. The organisers of the Day, a British charity called Down Syndrome International, say that people with Down Syndrome are discriminated against and are often denied the right to participate in civic life. 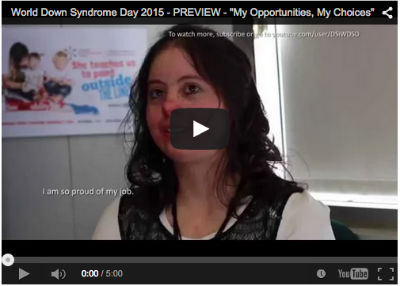 What’s odd about this complaint is that the biggest discrimination is not mentioned at all – the right to participate in life, period. Statistics vary, but an estimated 90% of women who know that they are pregnant with a Down Syndrome Child choose to abort it. Increasingly accurate prenatal testing services will ensure that fewer and fewer Down Syndrome Children enter the world, with the connivance of governments and doctors. In practice, the “choice” which Down Syndrome advocates are supporting is, sadly, the choice that adults make when they disabled children.

The generous and self-sacrificing work of Down Syndrome International must be acknowledged. But a bit of realism is in order, too. Why is it so reluctant to mention that Down Syndrome children are being denied their right to life?