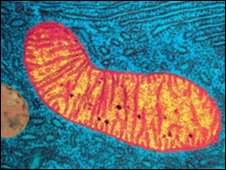 Scientists in England
say that they are just three years away from creating three-parent embryos
which would be free from rare mitochondrial diseases. In an article in Nature,
researchers from Newcastle University say that they created 80 embryos which grew for six to eight days to reach the blastocyst stage, a
ball of around 100 cells. They were then destroyed, in line with UK
legislation.

About
one in 6,500 children is born with serious diseases caused by malfunctioning
mitochondrial DNA, leading to a range of conditions that can include fatal
heart problems, liver failure, brain disorders, blindness and muscular
weakness. This technique cannot help children who suffer from these conditions.
Rather, it genetically engineers an embryo by replacing the defective
mitochondria with healthy mitochondria from an egg from a second “mother”.  “What we’ve done is like changing
the battery on a laptop,” said Dr Turnbull. “The energy supply now works
properly, but none of the information on the hard drive has been changed.”

In
their enthusiasm, scientists involved in the experiment tended to gloss over
the ethical issues. Alison Murdoch of the Newcastle Fertility Center, whose
patients donated the eggs for the research, says that all the characteristics
of the baby would come from its two principal parents.

However,
Josephine Quintavalle of campaign group Comment on Reproductive Ethics,
declared that “No matter how small the contribution from the egg of the
donor woman, the fact remains that an attempt is being made to create a
three-parent child.” And Peter
Saunders, of the Christian Medical Fellowship pointed out that “What is
currently happening in Newcastle may be legal in Britain – but it is illegal in
almost every other Western country for good public safety and ethical reasons.
Britain is regarded by many as a rogue state in all this.”

But other scientists thought the interests
of the parents, not the embryos, are paramount. “Is it fair for society to make
it impossible for a woman who has a high percentage of mutant mitochondrial
issues to have a healthy baby? That’s what I’m confronted with in my clinic,” California
geneticist Doug Wallace told Wired
magazine. “There’s an ethic of what’s best for the patient.” ~ AP, Apr
14