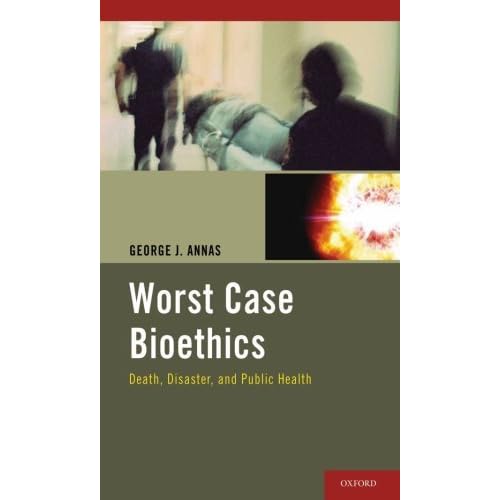 George J. Annas, of Boston University, is one of America’s best-known bioethicists. In this exclusive interview, he answers questions about his latest book, Worst Case Bioethics: Death, Disaster and Public Health.

BioEdge: What are the drawbacks of using worst case scenarios to make public policy, especially in bioethical issues?

GJA: Worst case scenarios, like the terrorist detonation of a nuclear device in a major American city, are almost always counterproductive as planning exercises, and predictably lead to even more worst case imaginings (worst cases can always be made worse) which in turn produce over-reaction, unintended consequences, and even worse disasters.

Bioethics is no stranger to worst case scenarios, which have been generally articulated in the language of the slippery slope—as in starting at the bottom of. Physician-assisted suicide, for example, is often opposed because it could lead to the worst case of the routine killing of the old, infirm, minorities and disabled people. Abortion is said to lead us to infanticide—or at least to “partial-birth” abortions; and human experimentation will turn us all into animals, human guinea pigs. Brave New World is seen, as the Bush Bioethics Council, not as a fictional scenario, but as a prediction of our future.

BioEdge: Worst case scenarios aren’t exclusively bioethical – the Y2K bug springs to mind – so is there something in our culture which encourages us to frame the future as Doomsday? Is it the legacy of the Cold War and mutually assured destruction, or something deeper?

GJA: It has to do with our deep fear of death. The first sentence of the book is, “Death is almost everyone’s personal worst case scenario.” This, in turn, makes “saving lives” a universal justification for action—both in medicine and in government. Mostly, we deal with our mortality by denial, by not dealing with it. We simply put our faith in modern medicine and scientific progress that somehow we will be provided with new technologies that will permit us to postpone death indefinitely—or at least for a long time. In effect, we fight worst case scenarios by imagining best case scenarios.

BioEdge: What are the effects of US health policy moving away from public health to public security?

GJA: US health policy has never been based on public health and population-based prevention—but rather on individuals and treatment of their illnesses and injuries, at least those who can afford to pay. To the extent that concerns over bioterrorist attacks and pandemic flu and SARS have commanded attention and at least some resources on public health, we have been responding by adopting a military national security model – complete with public health officials in military uniforms. This has encouraged our government to predictably concentrate on 19th century interventions like mandatory vaccinations and quarantine when an epidemic threatens, rather than scientific information, and at least some public health officials still expect Americans to simply “follow orders” in a public health emergency rather than make informed decisions. This is delusional.

BioEdge: Not long ago President Obama indicated that he would support a DNA databank for catching criminals. What do you think of this?

GJA: I think he simply made a mistake. The answer came in a bizarre context–an interview on John Walsh’s “America’s Most Wanted” TV show. I don’t think he was prepared to answer the question, and the president didn’t deal at all either with the 4th amendment or the racial discrimination aspects of a criminal DNA bank made up of “arrestees” rather than convicted felons. It’s a terrible idea to keep the DNA of an innocent person in a “criminal” DNA databank—making that person a criminal suspect for life, and ultimately making the US what my colleague Leonard Glantz and I have called a “nation of suspects.” The European Court of Human Rights has recently ruled that the UK must abandon this practice as a violation of privacy rights in a case I analyze in the book.

GJA: Worst case scenarios are very seductive, and the Obama administration has continued to use them to justify keeping Guantanamo open long after the date by which he had promised to close it, and to justify the continuing (and continuous) force feeding of hunger strikers imprisoned at Guantanamo (“the worst of the worst”) by physicians in direct violation of international medical ethics standards for the care of prisoners. This is the first time in the history of the US that it is official Department of Defense policy that military physicians cannot serve their country and follow basic medical ethics principles at the same time. This is disgraceful and should be seen by all physicians as intolerable. On the positive side, President Obama has strongly directed that no torture be used in his administration, even on suspected terrorists, – thereby rejecting the worst case “ticking time bomb” scenario. Another hopeful cultural sign is that Jack Bauer and his torture-featuring TV show, “24”, has been cancelled.

BioEdge: What is your own “worst case scenario” and why do you think that this is plausible while others are not?

GJA: A fair question that I devote the final chapter of the book, “Genetic Genocide,” to trying to answer. The short answer is that I think there is a subset of human experiments which can be classified as “species-endangering” experiments, including experiments to produce inheritable genetic “improvements” in humans, and experiments to produce new and more deadly genetic bioweapons. I think such experiments should be outlawed because I don’t think any person, corporation, or country has the moral warrant to put the entire human species at risk of extinction. Of course this begs your question of whether the risk is real (or at least plausible), or whether this is simply a science fiction scenario. To the extent that one thinks this concern is overblown I have proposed time-limiting a treaty outlawing species-endangering genetic experiments—such that it would expire automatically after the human species has gone for a period of time—I suggest a modest 50 years—without a genocide.

BioEdge: What do you think of Obama’s new Bioethics Commission?

GJA: I thought that the Bush Bioethics Commission was so politicized and embryo-centric that it undermined any good that could come from a government-sponsored bioethics panel. I think this experience counseled us to place any future federal bioethics panel outside of government altogether. Obama, however, has decided to up the political ante by making his own Bioethics Commission openly and explicitly political. He did this primarily by appointing a political scientist to chair it, putting members of his administration (including the Department of Homeland Security) on it, appointing only three members who could be considered bioethicists to it, and placing it firmly in the arms of the Department of Health and Human Services.

It is, in short, not a bioethics panel at all, but a governmental science policy advisory group, and at least its title should be changed to reflect this reality. It’s not a worst case scenario, but it is, sadly, a missed opportunity to depoliticize bioethics commissions. Especially sad, I think, because our country desperately needs independent expert bioethics analysis to move us beyond “death panel,” abortion, and conscience clause political rhetoric to issues of fairness, equity, and patient rights in what will be a long and hard-fought implementation and modification process for our new health insurance reform program.