Recently we spoke with COL Nelson L. Michael about bioethical deliberation in an age of rapid social and scientific change. 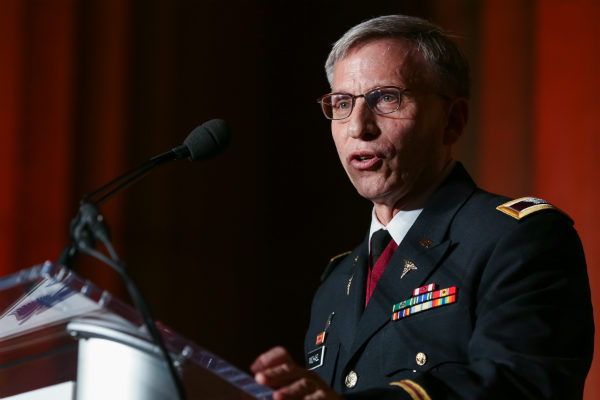 With an election round the corner, the Presidential Commission for the Study of Bioethical Issues is coming to the end of its term. The Commission recently released its final report, entitled Bioethics for Every Generation: Deliberation and Education in Health, Science and Technology. The report discusses the complexities bioethical decision-making in an age of deep ideological disagreements and rapid biomedical progress. The Commission members are optimistic, suggesting that agreement can be reached on substantive bioethical policy matters through processes of “democratic deliberation”. The report proposes an ambitious educational program to improve the bioethical literacy of the public, and also outlines a series of civic virtues that policy stakeholders should adopt when debating ethical issues.

Last week Xavier Symons, of BioEdge, conducted an email interview with Col. Nelson L. Michael, MD, PhD, about the report and the future of bioethics in the United States. Col. Michael is a PCSBI member, and also Director of the U.S. Military HIV Research Program at Walter Reed Army Institute of Research.

BioEdge: Hillary Clinton and Donald Trump are the likely candidates for the Presidency. Will the Commission continuing to function under a new administration?

Nelson Michael: From 1974-1994, national bioethics bodies in the US were established by Congress. Since the mid-1990s, each of the last three presidents, Bill Clinton, George W. Bush, and Barack Obama, has established bioethics commissions to explore ethical issues in science, medicine, and technology. President Barack Obama created the current commission by Executive Order in November 2009. This Commission’s tenure will end when the next President is inaugurated.

Whether to establish a national-level bioethics body will be up to the next President, whoever he or she turns out to be.

What issues is the Commission likely to address in the near future?

This Commission will end its work when the next President is inaugurated, in January 2017. For the next 6 months, the Commission members and staff will continue to develop educational materials and conduct outreach events all across the country, to publicize the 10 reports it has published during its tenure.

To date the Bioethics Commission has:

If the Executive Office of the President asks the Bioethics Commission to study a particular subject or answer a particular question in the last few months of its tenure, the Commission will turn its attention to that topic. However, absent a request from that office, the Bioethics Commission will complete its work by reflecting on the past, present, and future impact of national bioethics advisory bodies with the goal of charting a path forward.

CRISPR technology seems to be a game-changer in biotechnology — and bioethical debates. Do you really think it’s possible to avoid spirited debate over it use?

National and international science communities are grappling with the ethical and societal implications of CRISPR/Cas, a powerful and efficient technology that is being used by thousands of scientists to edit plant and animal DNA, and that researchers hope to use to alter human genes to cure and eliminate certain diseases. Despite CRISPR/Cas’s promise, potential consequences include the possibility of an error in genetic engineering, use of the technology for bioterrorism, and unanticipated implications for future generations of altering even such seemingly harmless genes as eye color. CRISPR/Cas also raises concerns about the potential implications of altering the “germline,” or the DNA of future generations of humans.

The National Academy of Sciences (NAS) has initiated an effort to do just that. NAS is committed to examining both the scientific as well as the “clinical, ethical, legal, and social implications of human genome editing technologies.” Dr. David Baltimore, chair of the NAS committee emphasized, “This is the way decisions get made in a democracy. We may not be representative of all America, but it is a beginning process and an ongoing process. It does establish a precedent for the handling of difficult issues that we can be proud of.”

The idea of “democratic deliberation” seems modelled on the process used in the UK to produce a scientific consensus? It was successful, but was criticised for smothering substantial debate in focus groups and reports. How would you respond to this criticism?

In fact, the process used by the Human Fertilisation and Embryology Authority (HFEA) in the UK to address the issue of mitochondrial donation encouraged and facilitated public debate. The discussions were facilitated using democratic deliberation, which emphasizes mutual respect and reason-giving. This distinguished those conversations from the kind of debates we are more accustomed to, which often involve name calling, personal attacks, and political sound bites.

Democratic deliberation is not foolproof—limitations and challenges exist with every method of decision making. However, in general and compared with the status quo in our U.S. political system, deliberation has many advantages. It provides a morally and practically defensible way for addressing hyperpartisan gridlock. It also promotes mutual respect rather than fueling the sharp polarization and heightened differences that make consensus and legitimate outcomes nearly impossible in our current context.

Could you explain the idea of lifelong bioethics education? It seems very ambitious!

Ethics education is best when it builds on itself over time. Just as we would not expect to develop math skills in an engineer or an accountant by starting with calculus, similarly, we cannot expect to develop ethics literacy unless we build an early foundation starting with the basics. To build ethics literacy, broad-based ethics education must start early, before students begin to track into more specialized interests and careers. Over time, ethics education should reflect societal and technological evolution, become more targeted, and provide preparation for the particular challenges that health, science, and technology professionals are likely to face.

Ethics education can be integrated into existing classes, and tailored to context. With younger students, ethics education might consist of a broad base of pedagogy about basic moral principles by using different age-appropriate methods to encourage children to start thinking about morality and ethics and by using examples they might encounter during their lifetime. In undergraduate courses, discussion and instruction on ethical and social issues might be tied more closely to specific subjects—for example, a molecular biology class might consider the ethics of stem cell research. In graduate or professional school, ethics training can be tailored to particular issues that professionals in that field are likely to encounter.

In a press release, Commission Chair Amy Gutmann was quoted as saying, “Bioethics involves matters of life and death, as well as deeply held values. They are not problems that we can solve in 140 characters.” Could you comment on the role of the media in facilitating bioethics discussion in the greater community?

Media can be a very important and useful tool for disseminating information and starting conversations. But to solve the really tough dilemmas we face as citizens and as individuals, we need more than 140 characters. We need time and space for reflective deliberations; we need time to educate ourselves and understand others.  This cannot be done by relying on sound bites, tweets, or hyped headlines as our only method to engage with complex issues.

The Bioethics Commission has used news media and social media extensively to promote its materials and help its reports reach a wider audience. We hope that those outreach efforts lead people to access our reports and educational materials and take a deeper dive into some of the bioethical issues that affect us all.