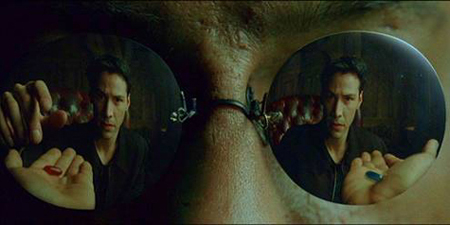 You probably remember the scene in The Matrix in which Morpheus explains to Neo the terrible secret: “You take the blue pill—the story ends, you wake up in your bed and believe whatever you want to believe. You take the red pill—you stay in Wonderland, and I show you how deep the rabbit hole goes.”

In the jargon of The Matrix, I’m a blue pill person and believe that I’m in touch with reality. Perhaps I am deluded.

Elon Musk, billionaire co-founder of PayPal, and the boss of Tesla and SpaceX, on the other hand, is definitely a red pill person. Last week he told a conference of geeks in San Francisco that we are probably part of a powerful computer simulation. In fact, he estimates that “There’s a one in billions chance that this is base reality”. (See story below.)

Musk is an intelligent man, but I wonder if he understands the ethical implications of the red pill. If we are really marionettes in a super-human intellect’s simulation of reality, nothing much matters. Certainly worrying about right and wrong is a waste of time. Human life doesn’t matter much either, as we are all just blips in a gigantic computer game. There’s not much incentive for social solidarity.

What do you think? Are we living in The Matrix?

Michael Cook
Elon Musk believes that we are part of a gigantic computer simulation.
1465140540

In an on-going case in Ontario, a severely disabled man is suing the Canadian government and local health authorities for...

The pace of normalisation of “medical assistance in dying” in Canada is picking up. A BioEdge reader noticed that McGill...

One of Canada’s best-known fashion retailers, Quebec-based La Maison Simons, has launched an advertising campaign based on euthanasia. A three-minute...

Nearly 2,700 people were euthanised in Belgium in 2021, according to the official figures from the national euthanasia commission –...

A 54-year-old Canadian man has applied for euthanasia because he fears becoming homeless. Amir Farsoud, who lives in St Catharines,...

A radical Dutch right-to-die group has challenged a ban on non-physicians helping people to die, claiming that it is a...