Excerpts from passionate speeches by some members of the Britain’s upper house of Parliament. 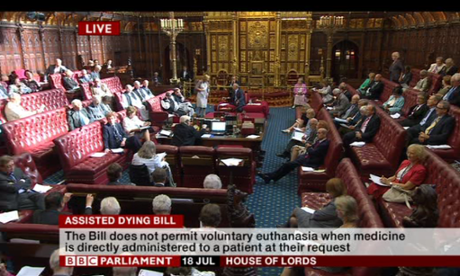 The debate on the Assisted Dying bill in the House of Lords last Friday (July 18) was a remarkable display of eloquence, knowledge and passion. Here are some excerpts from speeches of supporters of the proposed legislation, beginning with Lord Falconer, a former Lord Chancellor, who proposed it.

A record number of Lords spoke, more than 130, in a debate which lasted 10 hours. However, this did not resolve the issue. After passing a second reading, the bill passes to a Parliamentary committee which will scrutinise it and propose amendments.

Lord Falconer of Thoroton (Labour): My Lords, in the last stages of a terminal illness, there are people who wish to end their life rather than struggle for the last few months, weeks, days or hours. Often it is not the pain that motivates such a wish, but the loss of independence and dignity. Those who love them often try to help, sometimes by going with them to Switzerland. Nobody wants assisters who are motivated by compassion to be prosecuted. The courts and the prosecution authorities recognise this impulse and have tried to steer a course between Section 2 of the Suicide Act 1961 and the desire not to enforce it. But the current situation leaves the rich able to go to Switzerland, the majority reliant on amateur assistance, the compassionate treated like criminals and no safeguards in respect of undue pressure. Many people, caring so much for those they leave behind, are dying earlier and alone because they fear implicating their loved ones in a criminal enterprise. They horde pills or put a plastic bag over their head when they are alone.

The Earl of Glasgow (Liberal Democrat): I get very angry when those who oppose the Bill misrepresent what it is actually proposing and fail to mention how limited its aims intentionally are. It applies only to those who are already terminally ill yet still in sound mind who want, as we all surely do, some control or say in the manner of their own death. It has nothing to do with coercing vulnerable old people into killing themselves. Yet our opponents use emotive words such as “legalised killing” or “euthanasia” and talk about this being a slippery slope that could lead to the eventual demise of the frail, disabled or mentally ill. No, it does not. No, it is not. The Bill is about personal choice and the alleviation of unnecessary suffering—the choice to decide how, where and, to a small extent, when you want to die.

Lord Avebury (Liberal Democrat): As a Buddhist, I recognise that this Bill contravenes fundamental Buddhist beliefs in the inviolability of human life, but there is also the Buddhist principle of compassion, which I think applies in the extreme circumstances of distressing terminal illness. That, it seems to me, weighs heavily in consideration of this Bill and is partly what has persuaded me to support it. I believe that the same is true of many other people of strong religious faith, both Buddhists and Christians. They believe, as I do, that helping people who are suffering from distressing terminal illnesses outweighs the principle of inviolability of human life.

Baroness Murphy (crossbench): My Lords, I am afraid that the noble Lord, Lord Gordon, will be disappointed that I am one of those members of the medical profession who would be proud to be associated with the Bill. I certainly would not desist from becoming an expert under a code of practice to administer medication to those who had requested it, if the Bill was passed. Many members of the medical profession feel, as I do, that at the moment the provisions are fudged, the system does not work and it depends on regular, 24-hour hypocrisy to deliver the care that we are currently obliged to pretend that we give.

Last time we debated this topic in the House, I rather lost my temper—egged on, I have to say, by the noble Baroness, Lady Boothroyd—so I have promised myself that I will not do so this time. However, one of the things that trouble me about debates in this House is that we go endlessly for emotional anecdote, talking about our experience, or talking about other jurisdictions as if we have looked at the evidence. I have sat here as a simple medical scientist—I was a practising psychiatrist and academic for 30 years, working with elderly people in the most deprived community in south-east London—and I have to tell noble Lords that I do not recognise any of the fears from evidence.