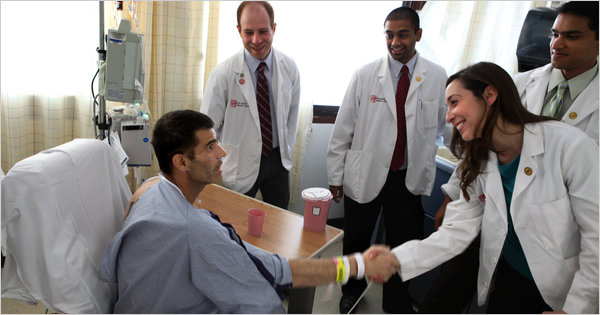 The University of
Medicine and Dentistry of New Jersey, in a new initiative to
humanise doctor-patient relations, pairs medical students with patients who are
dying alone. As described in the New York Times, the two-year-old project is
part of centre for
humanism that seeks to promote “dignity and respect for the
individual, commitment to the relief of suffering and the delivery of care that
is kind, just and humble”.

The foundation initiated and supports two
other national programs: the Gold Humanism Honors Society, where physician
members are inducted based on clinical acumen as well as bedside manner, and
the white coat ceremony. At this formal event, carried out at most US medical
schools, first-year medical students take the Hippocratic Oath, pledge to
provide patients with compassionate care, hear from prominent figures from the
humanist movement and receive their first white coats.

“With programs like these,” said Lester Z.
Lieberman, founding chairman of the Healthcare Foundation of New Jersey, “we
are hoping to gain some leverage with these young doctors, so that they go out
and practice and treat their patients as human beings and press their
colleagues to do the same.”

Critics have asserted that the benefits of programs like these are, at
best, transient, maintaining that when young doctors face the dehumanising
processes of internship and training, and the financial demands of practice,
even their most cherished ideals will be lost. Supporters disagree. They argue
that the “science” of humanism has made significant headway over the last two
decades. ~New York Times Jun
3

The death of Queen Elizabeth II on Thursday has dominated headlines for the last few days. BioEdge's editor was searching...

Doctors and medical schools are being provided with detailed guidelines for accommodating the needs of transgender and gender-diverse medical students....

Never simple, brain death in UK babies is being reviewed after a 3-month-old baby was declared “brain dead” due to...

Two more countries are debating whether to legalise euthanasia: Scotland and Uruguay. In Scotland a Liberal Democrat member of the...

After a fiery car crash on August 5, Anne Heche, a Hollywood actress who starred in TV shows and films...