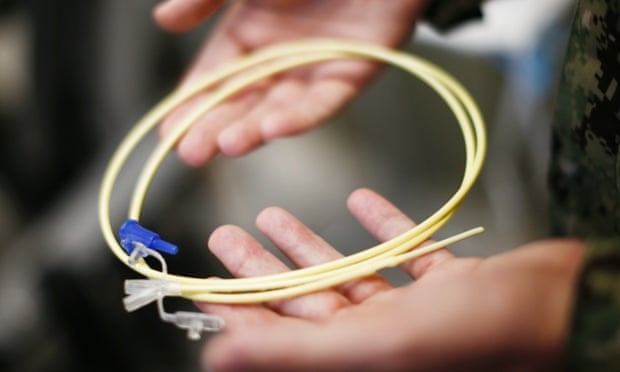 A US medical academic has made a scathing attack on the practice of force feeding elderly patients. Writing in the New York Times, Dr. Haider Javed Warraich of Duke University Medical Center compared the practice to the force feeding of patients in Guantanamo Bay:

“The practice of forced feeding has been highlighted by its use on hunger strikers in Guantánamo Bay… But you don’t have to be in prison to have a feeding tube jammed up your nose. Millions of elderly Americans are fed through tubes despite a lack of substantial evidence pointing to any clinical benefit.”

According to Haider, tube feeding is often administered as a result of family who refuse to accept that a disease has progressed beyond the possibility of remedy. But doctors are often just as much to blame, he writes.

“Doctors are known to be an overly optimistic bunch, and a survey revealed that almost two-thirds of them erroneously believed feeding tubes would improve survival in their patients. In fact, given that tube feeding has now been shown to be harmful in patients with dementia, it should not even be offered to this population. “

Warraich believes there needs to be a seismic shift in attitudes toward this procedure, and all interested parties need to co-operate:

“Financial incentives that may be driving overuse need to be discarded. Patients who are expected to live at least a few days should be fed by hand, but families must accept that in some cases, the inability to eat is itself often a sign that the disease has progressed to its final stage. For those patients who can’t be hand fed and who don’t want to be fed, inserting a tube only compounds their agony.”

The article comes in the wake of a widely publicised court case invovling an elderly Canadian woman who was fed by her doctors despite having written an advance directive asking for this not to happen. Importantly, this was not a case of force feeding, though some argued it was comparible to the practice. The woman’s family wanted nutrition and hydration to cease so that she would die a quick death. The plaintiff’s lawyer argued that the continued feeding was a kind of “battery”.