Experts say that the risk of serious disability from concussion is too great. 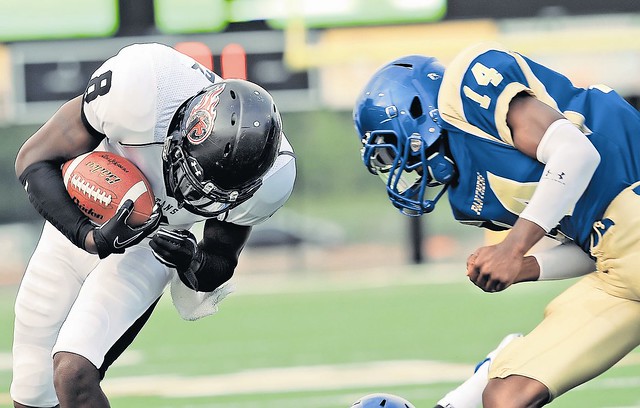 Bioethics is closing in on American football. An expert on concussion writing in the New York Times says that children should be allowed to play until they have reached the age of consent.

It is our moral duty as a society to protect the most vulnerable of us. The human brain becomes fully developed at about 18 to 25 years old. We should at least wait for our children to grow up, be provided with the information and education on the risk of play, and let them make their own decisions. No adult, not a parent or a coach, should be allowed to make this potentially life-altering decision for a child.

Dr Bennet Omalu, who first diagnosed  Chronic Traumatic Encephalopathy (CTE) in 2002 (and is the subject of the recent film Concussion), says that young players are at risk of  “major depression, memory loss, suicidal thought and actions, loss of intelligence as well as dementia later in life [and] drug and alcohol abuse as the child enters his 20s, 30s and 40s”.

In January the American Journal of Bioethics is to publish an even starker picture of the risks of football. Steven H. Miles and Shailendra Prasad argue in a pre-publication blog post that public school tackle football programs should be banned because of the high prevalence of concussions.

The authors discuss two additional complications in addition to the possible harm that football can cause: consent and dual loyalty.

High school players are not capable of giving informed consent, they say. Existing consent forms do not quantity risk or minimize it. They do not take into consideration pressure from parents who hope that their son will become a professional athlete. And coaches and doctors are often caught between putting the players’ health first and maximising the interests of the “youth football industry”. They conclude:

… we believe that this is a time for “primordial prevention” that remediates “environmental, economic, social and behavioral conditions, cultural patterns of living known to increase the risk of disease.” For health care professionals, primordial prevention might commend ending support for football in public schools. By this option, health professionals would oppose public support for bonds to build stadiums or athletic facilities for junior or senior high school football. They would oppose public school programs granting academic credit for playing football or leave of absences for practice or games. Such a proposal would not ban youth football. Private play and private leagues, like the Pop Warner program, would continue. Young people choosing such programs would play purely for the game and not be lured by ‘school spirit.’ Health professionals would continue to promote life long exercise programs and school physical education programs. However, under this proposal, the medical community could help students, schools and society leave a sport on which the sun is setting.

This is a topic which will guaranteed to get a lot of publicity in January, with the publication of the AJOB, the release of Concussion (which has been tagged “the Christmas Movie the NFL Doesn’t Want You to See”, and the run-up to the Super Bowl.

Facial recognition technology is being used in warfare for the first time. It could be a game changer in Ukraine,...

The World Health Organization has refused to panic over the rapid and unprecedented spread of monkeypox across the globe. In...

Happy the elephant, a long-time resident of the Bronx Zoo, can remain there after the New York court of appeals...

The United Kingdom is once again debating brain death. In recent years there have been several high-profile disputes between parents...