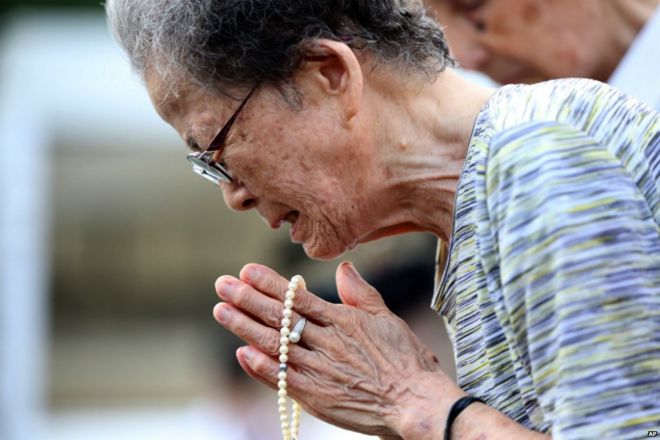 A survivor prays at Nagasaki

I am afraid that the newsletter is late. I hope that we will return to our normal schedule next week. However, the small delay means that our publication date is August 9, the 70th anniversary of the dropping of the atomic bomb on Nagasaki.

It has always amazed me that the ethical debate over the bomb has not advanced much since 1945. For most people, the moral reasoning was, and is, pretty simple. Hundreds of thousands of American lives were saved, so shut up. As an example, a popular conservative American website published an article last week about Hiroshima and Nagasaki. “Japan deserved to be nuked and it deserved it ten times over,” wrote columnist John Hawkins. “They needed to be stopped by any means necessary, that’s exactly what we did and the world, INCLUDING JAPAN, is a much better place for it.”

This is a fine example of consequentialist reasoning: it is ethical because it worked. But consequentialism is a double-edged sword. If foetal stem cells work, using tissue from aborted foetuses must be ethical, too. I wonder if defenders of the bomb connect the dots.

The Japanese regime was brutal. But so was the United States. The number of Japanese who died in Hiroshima and Nagasaki was about 250,000 – more than twice the number of American soldiers who died in the whole war in the Pacific (106,000). Nearly all of them were civilians, including 3,000 American citizens of Japanese ancestry who had been caught in Japan at the beginning of the war. Nowadays, we call attacks on innocent civilians terrorism.

Michael Cook
Are we better off because of the bomb?
1438601280
atomic bomb
Nagasaki