Dante is not a figure who is often invoked as a forerunner of transhumanism, the movement to accelerate man’s evolution with technology and genetic engineering. 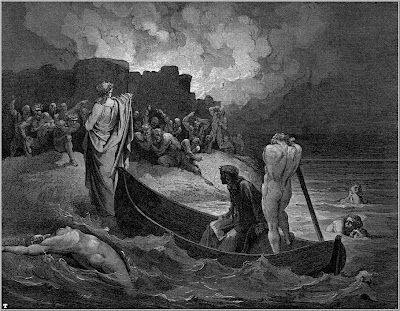 Dante is not a figure who is often invoked
as a forerunner of transhumanism, the movement to accelerate man’s evolution
with technology and genetic engineering. However, Fabrice Hadjadj, a French
philosopher, recently delivered an extremely interesting lecture in the Paris
offices of UNESCO. He was making a contribution to the Vatican’s outreach to the
secular world.

We can borrow a word invented by Dante and
say that man is made to “trasumanar.” But how does he
“trasumanar”? And how should “transhumanism” be understood?
This word must echo in a special way within these walls. Because the
substantive, “transhumanism,” was coined in 1957 by the biologist
Julian Huxley, who was the first director general of UNESCO…

If,
in 1957, this first director general of UNESCO invented the substantive
“transhumanism,” he did it in order to avoid talking further about
“eugenics,” a word that had become difficult to use after Nazi
eugenics. Nonetheless, the same thing is intended: the redemption of man
through technology. I cite the 1957 text that invented the term; it presents
this “new principle”: “[The] quality of people, not mere
quantity, is what we must aim at, and therefore that a concerted policy is required
to prevent the present flood of population-increase from wrecking all our hopes
for a better world.”

You understand that it is the very
definition of man that is at stake in our encounter. And therefore the very
future of man. Man is seeking something beyond. He is transhuman by nature. But
how is the “trans” of the transhuman realized? With culture and
openness to the transcendent? Or with technology and genetic manipulation?
[…]

So
then, here is my simple question: should we take Julian Huxley as our guide, or
should we take Dante? Is the greatness of man in the technical facility to
live? Or is it in this laceration, in this openness that is like a cry to
Heaven, in this appeal to what really transcends us? […] ~ Chiesa, April 1