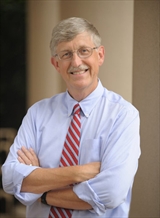 This post is not exactly about bioethics,
but about the context of bioethics, at least in America. The Obama-appointed
head of the National Institutes of Health, Francis S. Collins, has published
two books for the general public this year (where does he get the time?). The
first outlines his passion to promote the revolutionary potential of
personalised medicine, The
Language of Life: DNA and the Revolution in Personalized Medicine.

The publisher’s
blurb describes it as a very readable book for the layman in which “Collins
describes the medical, scientific, and genetic revolution that is currently
unlocking the secrets of ‘personalized medicine,’ and offers practical advice
on how to utilize these discoveries for you and your family’s current and
future health and well-being.”

Uncontroversial stuff, and quite
appropriate for the government’s voice for science. But here’s the
controversial book: an anthology of readings about the compatibility of faith
and science, Belief:
Readings on the Reason for Faith. Bloggers about science and faith are indignant
at Collins’s insistence that God exists and religion matters:

Faith and reason are not, as many seem to
be arguing today, mutually exclusive.  They never have been… Down through
the centuries, humanity’s greatest minds have developed interesting and
compelling arguments about faith, based on moral philosophy, arguments about
nature, and examination of sacred texts.  But outside of limited academic
circles, these deeper perspectives are not heard from much these days. The goal
of this anthology is to present some of these points of view, to spur on a more
nuanced and intellectually rich discussion of the most profound questions that
humanity asks: Is there a God? If so, what is God like? Does God care about me?
And what, if anything, is the meaning of life?

Bioethics, medicine
and science are often assumed to be dominated by agnostics or atheists. It is
interesting to see that the most prominent figure in American science is a
believer.