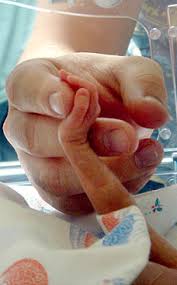 How long does it take for a disabled new-born
infant to starve to death? Up to 26 days, according to doctors from Vancouver. At
the 18th International Congress on Palliative Care in Montreal, Dr Hal Siden, of
Canuck Place Children’s Hospice, said “These babies live much, much longer
than anybody expects. I think that neonatologists and nurses and palliative
care clinicians need to be alerted to this.”

He based his findings on five cases in which
nutrition and hydration were withdrawn from babies because of severe congenital
impairments. To ensure that neither the babies nor their parents suffered, he administered
high doses of powerful sedatives. “Parents really wanted to know that
medications were being used because they didn’t want their child to have the
sensation of hunger in any way, shape, or form,” said his colleague Kerry
Keats.

After feeds and hydration were discontinued,
the mean duration of survival was 13.2 days (range, 3 to 26 days), she said.
Infants’ ages at death ranged from 18 to 67 days.

Although the children did not fuss or cry,
the parents found the gradual emaciation of the child as it starved to death
quite hard to bear. (Although “starve” is an loaded word, the baby’s death
certificate lists “starvation” as the cause of death.) An informal poll by Dr
Siden indicated that many paediatric palliative care specialists were familiar
with such cases. ~ Medscape,
Oct 7